FBI agents announced Tuesday that they had recovered the pair of Ruby Slippers snatched 13 years ago from the Judy Garland Museum in Grand Rapids, Minn. Considered one of the most iconic pieces of Hollywood memorabilia, the Ruby Slippers were made famous by the child star in her role as Dorothy in the 1939 MGM film, The Wizard of Oz. 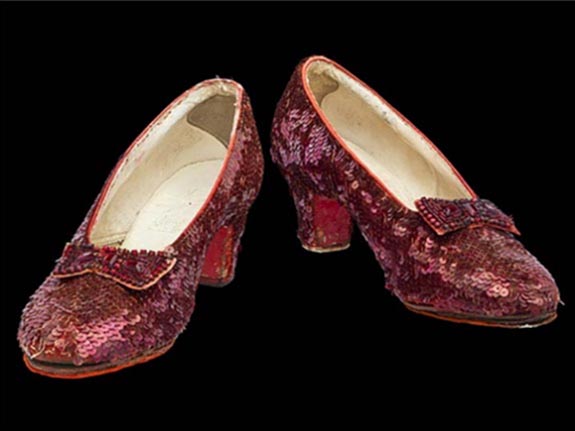 Before announcing the recovery, the FBI had sent the sequined shoes to the Smithsonian for verification. As many people know, a similar pair had been one of the most popular attractions at the National Museum of American History in Washington, D.C., but was pulled from its exhibit in 2016 to undergo conservation care funded by a Kickstarter campaign.

Smithsonian objects conservator Dawn Wallace had spent more than 200 hours examining the Smithsonian’s pair and was intimately familiar with every detail.

Wallace confirmed that the FBI’s pair was the real deal, but in a surprising turn of events revealed for the first time that the pair that had been in the museum’s possession since 1979 was mismatched. The left and right shoes were of different sizes. The heel caps and bows on each shoe were not identical.

What’s more striking is that the FBI’s recovered pair had the same issues. When the four shoes were laid side by side, two identical pairs were temporarily united.

The Smithsonian believes that the mix-up may have occurred in the run-up to a 1970 auction of MGM costumes and memorabilia. That’s when the Smithsonian’s pair was originally obtained and could have been confused with the other pair because all four shoes had felt bottoms and were intended for dance sequences.

MGM’s chief costume designer Gilbert Adrian had created multiple pairs of Ruby Slippers for the film, but only five pairs are known to still exist. Each of the pairs is believed to be worth up to $5 million if offered at auction.

Interestingly, Dorothy’s Ruby Slippers are not made of ruby at all. In fact, the bugle beads that prop designers used to simulate ruby proved to be too heavy. The solution was to replace most of the bugle beads with sequins, 2,300 on each slipper. The butterfly-shaped bow on the front of each shoe features red bugle beads outlined in red glass rhinestones in silver settings.

The Smithsonian’s mismatched pair will return to public view in a brand new exhibit on October 19.

In August 2005, the slippers displayed at the Judy Garland Museum disappeared after closing time in a classic smash-and-grab event. The only clue left behind was a single red sequin. The case finally broke in the summer of 2017, when an individual approached the company that had originally insured the slippers for $1 million and said he had information on how they could be returned.

After a yearlong investigation that combined the efforts of FBI field offices in Chicago, Atlanta and Miami, the slippers were secured during an undercover operation in Minneapolis.

Although the Ruby Slippers have been recovered, the investigation is ongoing because the FBI is still seeking those responsible for the 2005 heist.