Year in Review: These Are the Rough Diamonds That Rocked Our World in 2019

Welcome to our year-end review of the rough diamonds that rocked our world in 2019. Each is unique in its own way and has a fascinating story to tell… 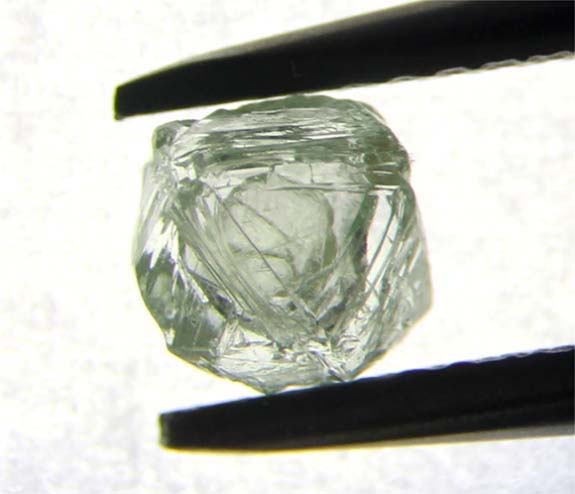 Diamond in a Diamond.
Revealed to the world via a social media post, Alrosa’s “diamond in a diamond” is a head-scratching, natural phenomenon that rates #1 in our survey.

Alrosa had surprised its Instagram followers in September with a video that seemed to show a tiny rough diamond moving freely in the cavity of a larger one. The caption read, “A diamond in a diamond? We couldn’t help but share this very special find with you.”

After its scientists confirmed that both the host and smaller crystal were diamonds, Alrosa named the double-diamond “Matryoshka” because its strange configuration was reminiscent of the popular Russian nesting dolls. In November, the Russian mining company added the 0.62-carat specimen to its collection of rare finds and declared that it was not for sale.

World’s Second-Largest Rough Diamond.
In April, Lucara recovered a massive 1,758-carat grey-black diamond from its Karowe mine in Botswana and, in July, the world’s second-largest rough diamond was named “Sewelô,” which means “rare find” in the native Setswana language.

Sewelô is the size of a tennis ball and weighs about 12.4 ounces. Measuring 83mm x 62mm x 46mm, the rough diamond was characterized by Lucara as “near” gem quality with “domains of high-quality white gem.” The unbroken 1,758-carat stone was recovered through Lucara’s XRT circuit in April 2019.

By employing XRT scanners, diamonds can be separated from other material based on their chemical composition. Since commissioning the XRT circuit in 2015, a total of 12 diamonds in excess of 300 carats have been recovered at Karowe, including two greater than 1,000 carats. 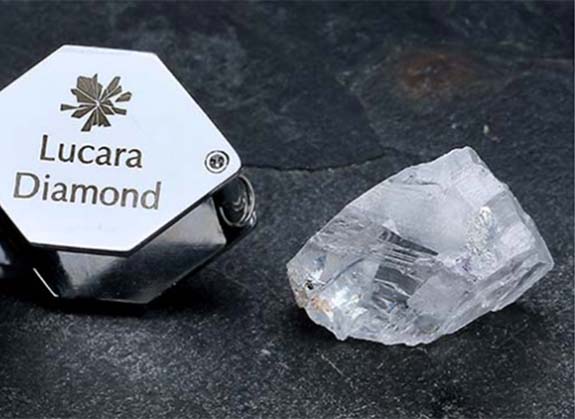 Pulled From the Scrapheap.
Imagine finding treasure in your trash. That’s exactly what happened when Lucara salvaged a 375-carat gem-quality diamond from a pile of old tailings at its Karowe mine. Tailings are the residue of the diamond-bearing ore that was processed during an original mining operation.

The company revisited the tailings because they were generated prior to the 2015 implementation of its advanced XRT diamond scanners (mentioned in the Sewelô review), which were designed to identify and preserve high-value diamonds of 100 carats or larger. The 375-carat rough diamond was just one of nine 100-plus-carat diamonds recovered from the re-processing of old material.

Lucara’s Karowe Mine has yielded many of the world’s largest diamonds, including the 1,109-carat Lesedi La Rona, the 813-carat Constellation and the 1,758-carat Sewelô.

A Legacy Continues.
Also famous for producing many of the world’s largest rough diamonds — including the 3,106-carat Cullinan — the Cullinan mine in South Africa is still going strong after 117 years. In March, Petra Diamonds reported that it had unearthed a D-color, Type IIa rough diamond weighing 425 carats. Type IIa gems are the purest of all diamonds because they are composed solely of carbon with virtually no trace elements in the crystal lattice.

Two months later, the mining company sold the rough gem for just under $15 million to Dubai-based Stargems Group and Belgium-based Choron, and named the impressive stone “Legacy of the Cullinan Diamond Mine” to honor its connection to the legendary diamond source.

Originally known as the Premier Mine, the Cullinan mine has delivered seven of the world’s largest 50 rough diamonds, based on carat weight. These include the Cullinan Heritage (507 carats), Centenary (599 carats), The Golden Jubilee (755 carats) and the biggest gem-quality rough diamond of all time — the Cullinan.

Once-in-a-Lifetime Find.
The largest blue diamond ever discovered in Botswana was revealed to the world by the state-run Okavango Diamond Company in April. The 20.46-carat faceted gem was cut from a 41.11-carat rough diamond sourced at the Orapa mine. The gem was named “The Okavango Blue” to honor the World Heritage Site known as the Okavango Delta. The lush delta is the home to hippos, elephants, crocodiles, lions, leopards, giraffes and rhinos.

“It is incredibly unusual for a stone of this color and nature to have come from Botswana. [It’s] a once-in-a-lifetime find,” said Okavango’s managing director Marcus ter Haar.

While the company did not reveal what The Okavango Blue might be worth, a similar diamond sold at a Christie’s auction in 2016 may hold the answer. The Cullinan Dream, a 24.18-carat intense blue diamond with a VS2 clarity rating, sold for $25.4 million at Christie’s New York in June of 2016. Based on that performance, one might presume The Okavango Blue has the potential to yield about $1 million per carat.